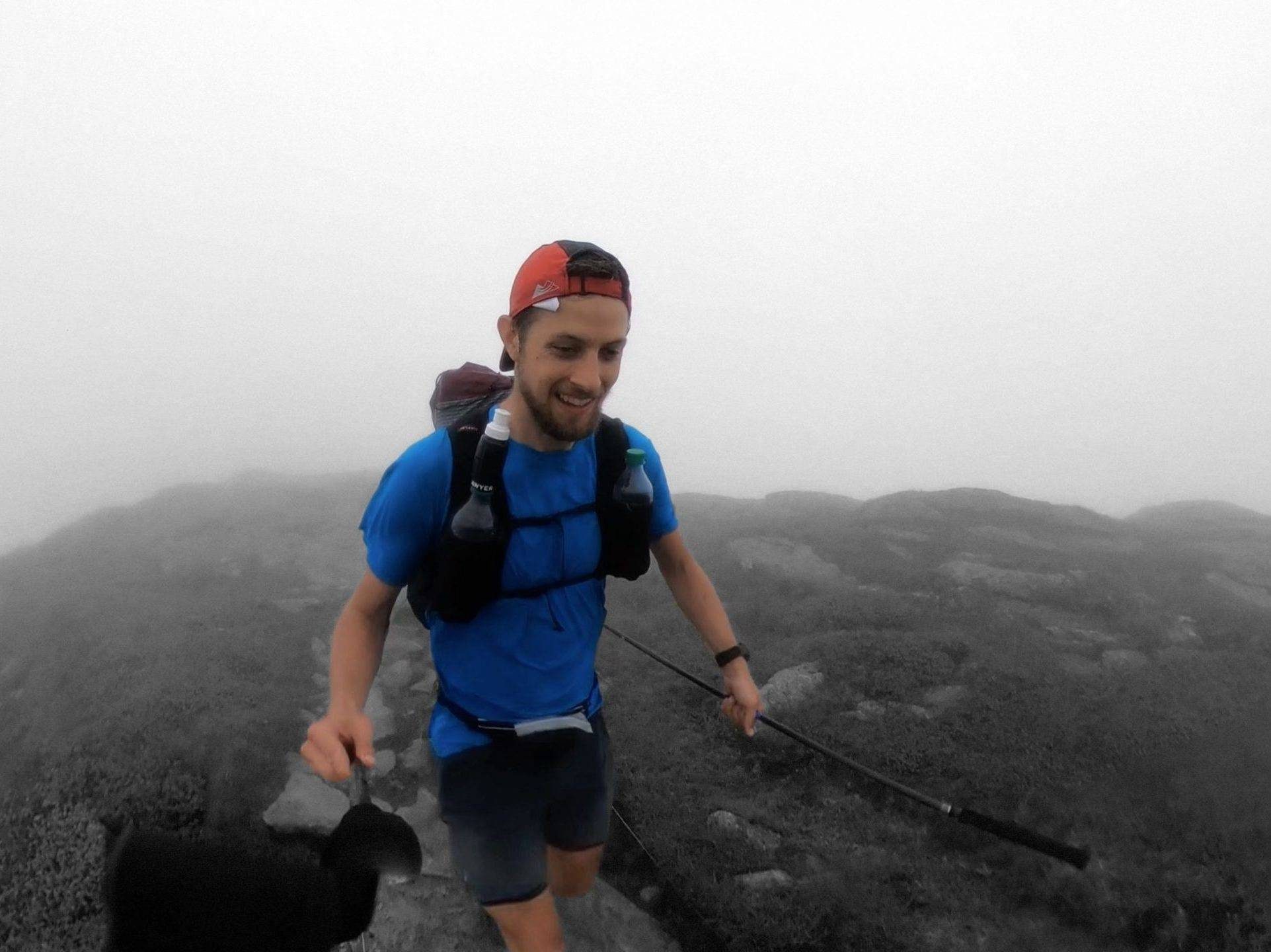 ‘Losing Light | Long Trail FKT’ is a documentary produced by Pilot Field about my self-supported Fastest Known Time (FKT) on the Long Trail. The Long Trail is a 272-mile trail through Vermont that traverses the Green Mountains from the northern border with Canada to the southern border with Massachusetts. Having covered over 5,000 miles on America’s long distance trail systems, I’ve seen a lot of rugged terrain. However, the Long Trail features the toughest trail conditions I have encountered to date. The Long Trail features for elevation gain per mile than the John Muir Trail in the epic Sierra Nevadas of California.

‘Losing Light | Long Trail FKT’ is about my self supported adventure, meaning I had no assistance, aid or film crew along the way. All the footage from the video was self-shot on a GoPro 360 and later edited by Pilot Field.

I have worked with Pilot Field to make four documentaries. Why do I keep going back to the same production company? Because Michael Dillon, AKA Dills, is an amazing friend, and he produces outstanding work. I really wanted to put together this Q&A, because ‘Losing Light’ is a fantastic story, but unless you are behind the scenes, it is hard to understand behind the scenes to create a compelling narrative. I messed around with a GoPro for 5 days, and he was able to arrange the footage in a way that would be featured by film festivals.

The best part about my friendship with Dills is that we both elevate each other. Dills and I met in college. The frisbee and cross country team had an allegience at Boston College. Dills was talented with the disk, and as you probably surmised, I was the runner. Dills was a year older than me and had started a fledgling production company, Pilot Field, after graduating. I was planning to run the Pacific Crest Trail the summer following my graduation. The first person to sign up for my support crew was Jordan Hamm, a cross country teammate, logistical mastermind and a childhood friend of Dills. So, Dills was a natural fit as the 2nd member of the support crew. We ended up setting the PCT FKT by over 6 days, raised over $34,000 for CancerCare in memory of my cousin who passed away from Neuroblastoma at the age of two and made an amazing documentary titled ‘The Run for Colin.’

Since then, I have seen Dills grow both his business and his documentary-production skills. He’s been able to balance his client base with a few of my crazy adventures. The PCT crew got back together for a road trip down the Pacific Coast sandwiched between two ultramarathons in ‘Why Not?‘ After setting the self-supported Appalachian Trail record, he edited all my footage for an incredible documentary titled, ‘STRINGBEAN.’ Most recently, he was on my support crew for the Arizona Trail FKT and released a 13-part daily vlog series, which is a reflection of the immense talent and work ethic he has. Dills would regularly stay up to 2 or 3 in the morning to have a next day vlog release, and he did that for 13 days.

I had a list of questions for Dills about the doc, and his answers are recorded below.

Stringbean: In the ‘Losing Light | Long Trail FKT’ documentary, you are trying to tell an intimate narrative, a solo effort adventure on the 272 mile Long Trail, with limited footage. What is the main storyline and message you are trying to convey to watchers?

Dills: My number one goal with any of the documentaries that we have worked on together is to convey the scope of the accomplishment (or failure) while also giving the audience a genuine glimpse into who you are as a person. The story is generally pretty straightforward since you are traveling from A to B, but each trail presents unique challenges and how you respond to those is what sets each story apart. Stylistically this film is most similar to STRINGBEAN, our Appalachian Trail documentary, but what was surprising to me was how much more difficult this attempt seemed to be despite being over 2,000 miles shorter.

That’s actually a funny question on this project because you filmed everything with a 360 camera. 360 cameras, in theory, give you the option in editing to pick any number of frames. So a clip of you walking is both a clip of your face, and also of whatever you are seeing. So one clip becomes two. We can also turn that clip so it’s looking at your feet. In that way, the amount of footage is hard to calculate, but we ended up with just under 2 hours of usable footage after converting it all from 360.

Stringbean: If you have been filming on-site, what types of footage would have supplemented the documentary?

Dills: The thing I really think we were missing on this film were static shots. As an editor it’s really helpful to be able to cut to a clip that is just still. It allows the audience to relax for a minute and is useful in transitioning from one scene to the next. But, at the same time, I sort of love that they don’t exist in this film because the conditions of the hike didn’t allow it. Editing a film just from GoPro footage is challenging, but I think the upside is that the audience really gets to feel how you felt on the trail.

Stringbean: Do you enjoy producing footage that was shot by someone else?

Dills: I enjoy editing footage that you shoot, but I wouldn’t say I enjoy editing other peoples’ footage generally. We first worked on The Run for Colin seven years ago, and that was the first time I was able to see how you filmed yourself on the trail. That informed decisions about how you would film on the AT, which gave us more insight into filming on the Long Trail. It’s been fun to watch you improve as a filmmaker to the point where handing you a GoPro on the Arizona Trail was so easy, and each time I knew you’d come back with something great for the documentary.

It’s a good exercise to edit other people’s footage because it can help me break from my typical editing patterns, and there’s always something to learn. But at this point, I prefer to edit what I shoot.

Stringbean: At this point, we’ve created 5 documentaries (Run For Colin, Why Not?, STRINGBEAN, and the AZT FKT vlog series), two of which were shot by me by GoPro and three of which were shot by you and Jack Murphy with more technical equipment. For someone filming their own adventure videos, what recommendations do you have?

Dills: For someone trying to document their own adventures, I think the most important thing to know is that a camera is only good if you are willing to bring it with you. It can be tempting to want to bring a bigger camera, or pack a drone, but if you resent needing to carry it, you’ll never use it. We are at a super exciting point where GoPro’s look like they are floating when you carry them handheld, and smartphones are all capable of shooting 4K video. Audiences are far more forgiving of footage shot out in the wild so it’s okay to not have “the best camera.”

But what does matter is audio. If you can’t have a mic on your camera, make sure you are close to it when you are speaking so that your voice is clear. And get as many different shots of as many different places and locations as possible. Variety is invaluable when it comes to editing.

Stringbean: What is the oddest footage that I’ve sent you?

Dills: That’s a great question. You’ve sent some weird stuff, from total delirium on the Long Trail to cleaning your crotch chafing on the AT. But the oddest footage I think are the clips where you hit record a little too soon. There were some great shots on the AT where you were recording before you had the camera set up on whatever rock you were using for a tripod, so there would be 20 seconds of the camera falling over as you tried to get it to sit still. Even though the footage from the trail is already raw, those felt like extra special looks behind the scenes. They were some of the only clips where you were looking at the camera and not talking.

Stringbean: Thanks for the interview! Last question. I know we have the 13 part blog series already out. When is the full length Arizona Trail Documentary set to release?

Dills: I am planning to go on the road to collect various interviews and perspectives for the documentary. The Arizona Trail documentary will be feature length and we are hoping to submit to film festivals by fall.

How mountain biking converted a track runner to trails