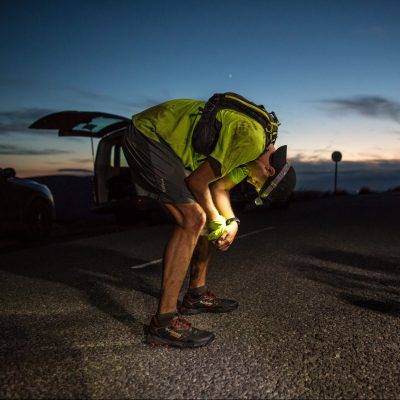 This year was a long year of racing, but a very fun one. I got out an incredible FKT, ran under my sponsorship with Columbia, and went very international. I’ve grown a lot this year, most specifically in mountain races. Compared to prior years, the sheer elevation of mountain races contrasted my long running base of being a mid-distance track runner. You’d think running the AT and PCT would have, but a mountain is a mountain ☺

This was the ultimate cap to my season. If you are ever going to do UTMB, do it right. First, get Katie (you have to find your own fiance) and your family to take a week to live it up the week before. If you are like my Columbia Teammate, Amy Sprolston, you will quit your job and take a month #jealous. Take lots of great Instagram pictures and visit the Saint Bernard Museum. Then set high expectations for finishing, but be okay when you realize that those long mountain climbs really kick your ass. The was the most well executed race I’ve had, which is really frustrating to finish 47th, but I’m happy. I under-trained this season, not getting in the mileage or long runs I was hoping for. At the end of the day, I ran a really mature race, hydrating and eating properly, not going out too hard or wrecking my quads on the downhill. I definitely want to get back ☺

When I saw this race, my eyes lit up. An ultra-championship right in my backyard? Katie and I packed up the fit and were off. My favorite surprise of this race was power duo Uli and Trisha Steidl. Uli was a local running folk hero for me. An accomplished marathon (sub 2:14) and mountain runner, we had crossed pathes 4 years ago when he introduced me at a talk about the PCT FKT in Seattle at the Mountaineers club. Anyway, Uli and I both had high hopes, ran hard, and then complained about not placing as high as we wanted. But at least Katie, Uli, Trisha and myself had a nice beer after.

Definitely my best race of the season. I should have done this one years ago!

Cue the start of something beautiful – three ultras in 6 weeks. That day in the hot Sicilian summer, there were two kinds of people filling the streets of Linguaglossa. Gangly, GPS watch wearing ultra-running gearheads in skintight clothes, and old, leathery local Italian men staring in bewilderment. I started in the former, but finished in the latter. Actually, after the race this is the worst I’ve felt besides a brief blackout with 200 meters to go in a college cross country race. I couldn’t sit upright without getting dizzy. My stomach felt terrible. I was very overheated. The race literally runs 29km up hill, and then 23km downhill. There is no in between. Similar to my race at Sean O’Brien in February, my stomach cramped and I emptied my stomach 7 miles from the finish. I ended up meeting some amazing other European runners, most notable Francesco Margano.

Clarky, Josh, Katie and myself take on Ireland’s coolest FKT. Wow, were those guys helpful. I cannot discredit Eoin Keith either, the past record holder who spent two days scouting, crewing and cheering to help me beat his own record. The man is a legend. Big ups to Columbia, Location Fixer Ireland, Pursuit Films and AGENCY for such an amazing video. Really, check it out. Now, for the course itself, if drawn on a straight line, the Wicklow Round would be just about 60 miles. When you add in the road add ons, detours around forests and up ridge lines, cliff faces, and smoother terrain, your closer to 75. Now throw in bogs, peat hags, marsh, and an idiot American. Oh, and he has to find his way around with map and compass. The lowest of low points was at mile 72, when I realized that I had to go through a quarter mile of dense, head high briar bushes to finish. It took about 20 minutes. I will never try acupuncture again. I was picking out thorns 3 weeks later from my skin.

A local favorite for me, mostly because it is the first time North Englanders (or more specifically those affiliated with TARC), gear up and toe the line. This 5k repeat course has a friendly aid station, windy, rooty New England trails, and some nice lake spots in Westwood, MA. In a timed race, you get 6 hours to let loose. In this case, we let loose on snow as the conditions get more sloshed through the day. Despite completing the same amount of loops in 2016, I’ll have to ask RD (and also the Justice of Peace for my wedding) Josh Katzman what the deal is about doing 3 miles less, although I may just be bad at counting.

Hot temps and an over tightened shoe led to impromptu and tendonitis on my foot. Katie and my family came out to crew, but after 50 miles I had to call it quit at a very nice aid station. You can’t win them all. They should change that phrase for ultras. You can’t finish them all. Here I learned the true importance of going into a race not being acclimated to heat, or at the very least accounting for it. Located in Malibu, CA, it is a really awesome destination race, but only for those who love heat and exposure.

Congrats to everyone’s seasons thus far, may it be healthy, adventurous, and wholesome.

Nutrition Strategy for an Ultramarathon or Multi-day Race